In times before social media, how did we capture significant moments?

We would tell stories, passing them down for all to remember.

Sometimes the stories become embellished blurring the lines between what we imagine and what really happened.

This was “back in the day.”  There was no instant way to take a picture or send a message.  A friend was someone with whom you socialized, not a verb signifying a social media action.

Back in the day, dressing up to go out meant a young lady wore an elegant dress, and a young man wore a suit and tie.

Music was typically performed by a big band or orchestra.  Dancing could take place in a ballroom.

One such ballroom was the Hollywood Palladium.

When I was scanning family photos I came across a piece of memorabilia that I had seen before but hadn’t really studied.

It was a photo inside a paper frame.  The cover showed it was taken at the Palladium.

There are four couples in the black and white photo.

My parents, Mary and Louie, are in the bottom right corner.

Behind my parents is my mom’s friend, Rae, and her future husband, Lupe.  Next to my mom is another close friend, Lucille. 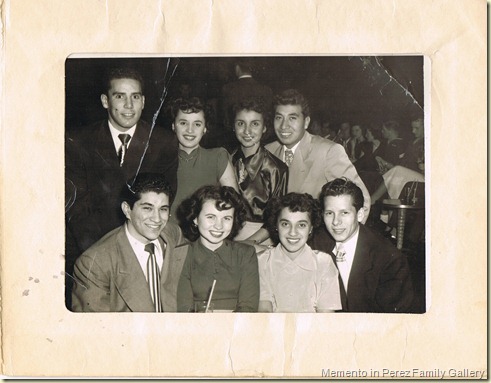 Four couples celebrate an evening of music and dance at the Hollywood Palladium. Although not all of the names are known, Cathy’s parents, Mary and Louie, can be seen in the bottom right corner. Next to Mary is her friend, Lucille. Standing in the back row behind Mary and Louie are friends, Rae and Lupe, who will also marry.

Most people may look at the photo and  see eight young people having a great evening.

That’s true!  But for my family this was an event that was significant.

My parents met at a church youth group.  It’s where they first came to know each other.

Well, my mom looked at this picture, smiled, and told me this was the first time my father had asked her to go out dancing!  I was looking at a picture of my parents’ first serious date!

I can imagine my mom asking her girlfriends what they were going to wear.

I can see my dad looking in the mirror, straightening out his tie, combing his hair just so.

They loved the sounds of big band music.  They would have danced the swing. 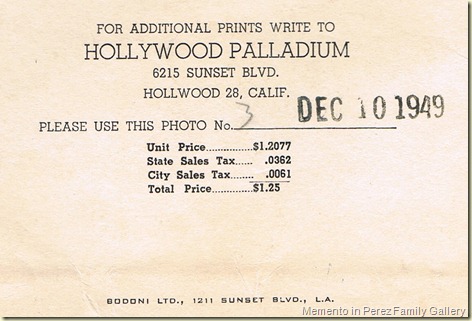 Back cover of the Hollywood Palladium souvenir photo. In 1949 you could obtain a reprint by making a written request. You would reference the photo number and the date. The cost was $1.25.

There are a couple of other items that are interesting.  The cost of a reprint  in 1949 was $1.25.   To obtain another copy you would  write to the Palladium and ask for a copy!  It’s another indication of changes over time.

There was one side of the photo that I didn’t print  here.

The photo was my mom’s.  Most of the people who are in the photo autographed the inside cover, writing a sentiment to my mom.

There were some precious words from my dad.

It was simply wonderful dancing with you all night and it would be a lot of fun doing it again.  Let’s remember 12/10/49.

Sixty-three years have passed.  It was very evident from my mom’s reaction to this photo that they haven’t forgotten that evening. 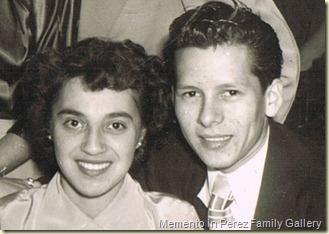 Mary and Louie enjoy a night to remember on December 10, 1949 at the Hollywood Palladium.